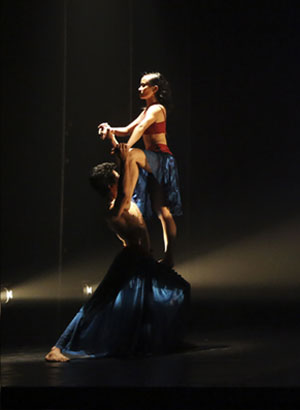 Navdhara India Dance Theatre (NIDT) is a contemporary dance company based out of Mumbai, India, founded by Indian-Australian choreographer Ashley Lobo. It was set up with the aim of helping out young dancers in India channelize their creative energies and to give them a platform to reach out and communicate with an international audience.

Combining the physical methodologies of western dance and the spiritual philosophies of India and Indian dance, including some thoughts from the ancient Indian gurukul system, NIDT seeks to allow newer methodologies and works of theatre and dance to come through. The focus is simplicity and communication. Sharing thoughts through this universal movement language, so all boundaries disappear and Navdhara or ‘new flow’ is achieved. To this end, all dancers have a strong western dance technique and this is then combined with indigenous tools like yoga, ancient Indian movement, meditations, and Indian classical and folk dance, to create a unique blend that just ‘is’. A movement style that is neither eastern nor western in nature, but completely universal. The only allegiance being to the truth of breath and prana or life energy.

The word ‘Navdhara’is a combination of two Sanskrit words - nav meaning new and dhara meaning flow or stream. Navdhara India Dance Theatre seeks to do just that -‘allow’ art philosophy and movement to flow, rather than be boxed-in by the limitations of the word ‘create’. It comes from a deep belief that movement already exists and all that is needed is the word ‘allow’ or flow. The only truth being breath and prana or life energy.

Navdhara India Dance Theatre’s chief mission is to communicate and build bridges within India and the international community through real human connection - by reaching out to audiences all over the world while still springing out of a base that is intrinsically Indian.

Its mission is also to create dance and art that is honest, and which focuses on the human connection through a style that is simple and narrative in nature, with an intention to share rather than tell, be felt rather than seen.